By All2share
Sep 02, 2021 Leave a comment
in World Information

“We are working very hard (and) we remain hopeful that we will be able to operate it as soon as possible … Hopefully in the next few days we will hear some good news,” Al Thani said on Thursday at a press conference with his British counterpart Dominic Raab in Doha.

The British foreign secretary said there was a need to engage with the Taliban on Afghanistan, but Britain had no immediate plans to recognise their government.

Raab said that the United Kingdom is not going to recognise the Taliban “any time in the foreseeable future”, adding that he will judge the group by its actions, not by words.

The airport was damaged as the US evacuated more than 100,000 people from the Kabul airport, with the last US troops leaving on August 31 – the deadline set by US President Joe Biden.

The Taliban captured power on August 15 in a stunning military sweep triggering the collapse of the West-backed Kabul administration. The group has also been celebrating the withdrawal of US-led foreign forces after 20 years of war.

As the Afghan group prepares to announce the formation of a new government, a humanitarian crisis is looming with the United Nations warning that one out of three Afghans is going hungry.

Al Jazeera has learned that food prices in Afghanistan have increased by about 50 percent, and petrol by as much as 75 percent, in recent days.

Here are the latest updates:

Tajikistan unable to take in Afghan refugees without help

Tajikistan cannot afford to take in large numbers of refugees and asylum seekers from neighbouring Afghanistan as it promised to do in the summer, said the police chief of Central Asia’s poorest country.

The government of Tajikistan said in July that it could take in 100,000 refugees, but that it needed to create infrastructure for them.

Interior Minister Ramazon Rakhimzoda said the government had allocated areas totalling 70 hectares along its Afghan border to receive refugees and has appealed to the international community for assistance.

“Not a single international organisation in 20 years has provided practical help in creating infrastructure to take in refugees and asylum seekers,” he said.

Qatar working with Taliban to reopen Kabul airport ‘as soon as possible’: FM

Qatar is working with the Taliban to reopen Kabul’s airport as soon as possible, Foreign Minister Sheikh Mohammed bin Abdulrahman Al Thani said, adding that the Gulf state was working with Turkey for potential technical support to restart operations in Kabul airport.

“We are working very hard (and) we remain hopeful that we will be able to operate it as soon as possible… Hopefully in the next few days we will hear some good news,” the Qatari foreign minister said at a press conference with his British counterpart Dominique Raab in Doha.

On his side, the British foreign secretary said there is a need to engage with the Taliban on Afghanistan, but Britain has no immediate plans to recognise their government.

Raab said that the UK is not going to recognise the Taliban “anytime in the foreseeable future”, adding that he will judge Taliban by their actions, not by their words.

Explainer: What leverage do US, allies have over the Taliban?

The United States and its allies may have left Afghanistan in the hands of the Taliban but they still have “leverage” to make the armed group honour commitments to allow people out of the country, according to US President Joe Biden.

This was echoed by US officials and other Western leaders who believe the Taliban can be pressured into abandoning their past policies with carrot-and-stick measures given Afghanistan’s outsized dependence on imported energy, food and foreign aid, as well as its shaky economy.

Read here some of the levers the West has to pressure the Taliban to honour women’s and human rights and cooperate with other countries.

Demonstration in Herat for women’s rights

At least 60 women in the Western province of Herat took to the streets to demand the respect of their rights.

Mariam Ebram, said that she felt the need to protest after she failed, together with a group of Herati women, to gain explanation from the Taliban over the group’s policies on women’s rights.

“We tried talking to them, but we saw that other than the Taliban of 20 years ago, there was no one there. There was no change,” the 24-year-old told Al Jazeera.

She said the women spoke frankly to several Taliban leaders, including the Police Chief and the director of Information and Culture: “You got rid of the occupier, you snuffed out democracy, but what will you bring in place of it, and what will our role be?”

A Qatari technical team is assessing damage in Kabul airport and it plans to make Kabul airport operational “soon”, an official from the Afghan Civil Aviation Authority told Al Jazeera.

The Afghan aviation authority said it will seek assistance from Qatar to restore air travel.

The Taliban says it has failed to find a peaceful resolution with the resistance movement in the Panjshir Valley due to the “irrational demands” it put forward, according to Al Jazeera’s Rob McBride reporting from Kabul.

According to McBride, the Taliban said the resistance asked to retain its weapons, while its leader Ahmad Massoud demanded 30 percent representation in the new government.

“It seems a big ask especially if you consider the relative size of this resistance movement,” McBride said, adding that the group is a “shadow” of what used to be the Northern Alliance 20 years ago which could claim support across swaths of northern Afghanistan.

Who are the Afghan refugees arriving in Pakistan? 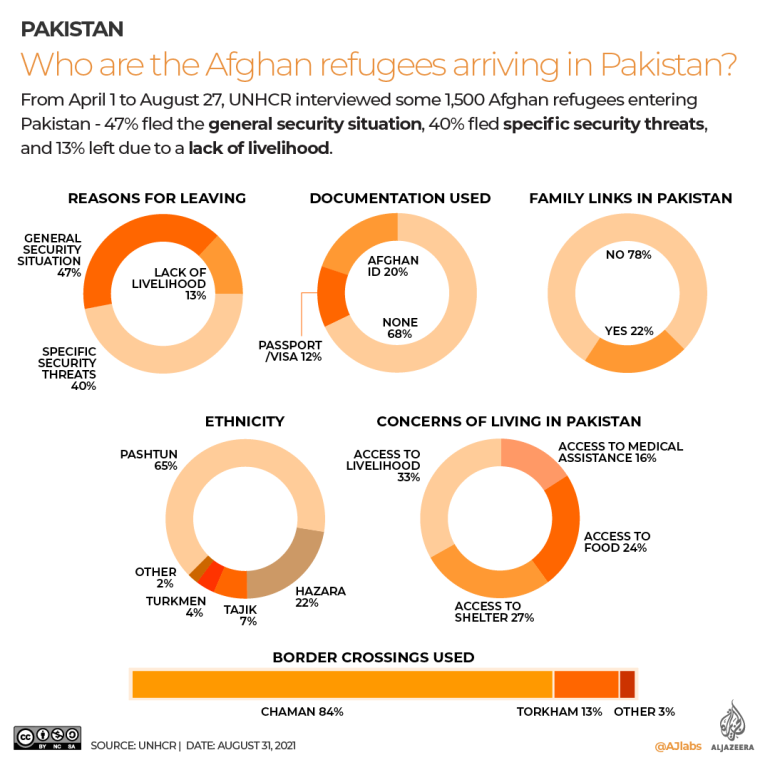 “The prospects of getting Kabul airport up and running and safe passage for foreign nationals and Afghans across land borders (are) top of the agenda,” the British Foreign Office said in a statement.

At least 60 pushbacks of Afghans reported in the past two weeks: DRC

The Danish Refugee Council has documented at least 60 alleged pushbacks of Afghans by authorities in Croatia, said the NGO’s Secretary-General Charlotte Slente.

Slente said such pushbacks, which are illegal under international law, were conducted in the past two weeks.

“This must change. Pushbacks are illegal – seeking asylum is not!” she said on Twitter.

An Afghan morning show on the country’s leading television channel, TOLO TV, has resumed broadcasting, with a female host, according to a company executive.

There have been concerns that the Taliban will limit the public participation of women. In the past, the Taliban had labelled TOLO TV a propaganda network.

TOLO TV’s breakfast show, Bamdad e Khosh, is back on with a female host via ⁦@TOLO_TV⁩ pic.twitter.com/UM1UQEb0WV

Fighting between Taliban fighters and those who oppose their rule has been reported in the country’s Panjshir Valley, according to a social media post by Muhammad Jalal, a ranking Taliban official.

He said “a dozen posts have been taken by the government”, but Al Jazeera could not independently verify his statement.

Fighting has been raging in Panjshir Valley since last night. So far, more than a dozen posts have been taken by the government. In the photo, taken this morning, a checkpoint on the top of the mountain appears to have caught fire. pic.twitter.com/yqvC9DYhoX

The Panjshir Valley, in the Hindu Kush mountains north of capital Kabul, has long been the heart of military resistance in Afghanistan. Since mid-August, forces opposed to Taliban have gathered in the valley under the leadership of Ahmad Massoud, son of the famed Afghan resistance fighter Ahmad Shah Massoud.

Afghanistan’s economy is likely to collapse following the rapid withdrawal of US forces and the Taliban’s return to power, the Reuters news agency reported, quoting Fitch Solutions.

“The highly disruptive manner in which the US’s security forces left the country and the Taliban takeover will mean that the economic pains for the country will be felt acutely over the short term,” said analysts in a report from Fitch Solutions.

The former US Treasury financial attache to Kabul blames the Taliban for the “dire” situation in Afghanistan, saying their “violent takeover” caused the current economic crunch.

“The situation… is quite dire right now. Even before this crisis, many Afghans were already living well below the poverty line,” Alex Zerden told Al Jazeera.

“The situation… is directly caused by the Taliban withdrawing from peaceful negotiations … and engaging in the violent takeover.”

The Taliban is struggling to keep the country functioning, according to Reuters, with foreign donors alarmed about an impending humanitarian crisis.

Prices have soared and crowds gather regularly to try to withdraw cash at banks that have been ordered to reopen – but strict weekly limits on withdrawals have been imposed.

The Taliban-appointed central bank head, Haji Mohammad Idris, tried to reassure banks the group wants a fully functioning financial system but has given little detail on how it will supply funds, bankers familiar with the matter told Reuters.

Fears for safety of Hazaras

The safety of Afghanistan’s minority Hazara community could be in jeopardy following the Taliban takeover.

In an interview with Al Jazeera, Abdul Ghafoor, director of Afghanistan Migrants Advice and Support Organization, said at least 14 Hazaras had been killed after surrendering to the Taliban in Daykundi province.

I discussed the killing of 14 #Hazaras on @AJEnglish, who had surrendered to Taliban in Daikundi province but were still killed by the Taliban. Full video in the first comment . pic.twitter.com/A2R656STnc

Gregory Meeks, Democratic chair of the House Foreign Affairs Committee, said he would not rule out recognising a Taliban-led government, but stressed that the group must live up to its commitments to respect human rights.

Speaking to MSNBC, Meeks said relations with the Vietnamese government were once thought impossible after the US withdrawal from the country, but Washington now enjoys warm ties with Hanoi.

“So you never say never, but there’s a lot the Taliban has to do to show they’re going to really uphold the principles of … human rights,” Meeks said.

US looking at land routes to continue evacuations

The United States is exploring ways to evacuate American citizens and Afghan allies, including overland, US officials said.

US Under Secretary of State Victoria Nuland said the Biden administration is engaged in “ongoing intensive diplomatic work” to help US citizens and Afghan allies wishing to leave Afghanistan following the Taliban takeover.

“We are looking at all possible options – air routes, land routes,” she said.

What Do You Say